Here’s a brief re-cap of key points from the Intro:

The bets are placed before Kick Off with a major bet on the main Match Odds market and with an “insurance” bet on another market for the same match. You do need to watch the odds in-play, so that you can trade off your bets. The sales page says that with £100 bets and a starting bank of £1,000, you would have made over £1,000 profit in 34 days! So we’ll see how we do over a 56 day period and if it is successful we will see how it does over the extended 84 day period.

The sales page describes it as a low-risk strategy, but it should be understood that it is the choice of matches that makes it “low-risk”, the actual bets, being lays, carry a relatively high risk. If the match goes against your expectation you can be carrying a lay liability of 4 to 7 points for 1 point lays. So the trick is to try to pick matches where the actual game does not go against expectation. If the match goes against you, the advice is to wait until half-time to see if it sways back in your favour. I expect this will take some nerve. The author advises not to worry!

If you look at the sales page, you will see what I mean; out of 34 betting days there were 4 losing days carrying losses of between -55 and -100; compare these to the profits on winning days. So the success secret is to pick matches where these losing days are rare. So their strike rate of successful winning days was 30/34 or 88%. I’ll compare that to the strike rate that I get.

So after 56 days I had made 81.43 points profit – nearly the target of 100. By day 84 I’d made 109.35 points. My strike rate of winning days was 50 winning days out of 64, which is 78%. I thought it was relevant to include no bet days when I looked for a qualifying match but didn’t get one, as it does take some time to check through all the Betfair Success Formula criteria.

Here is a graph of the running balance during the review period, starting with 100 points (£100) 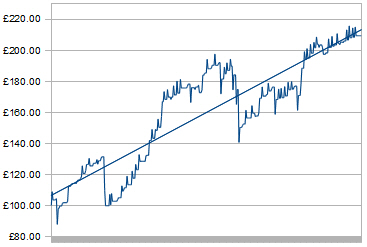 The straight line is the trend line – as you can see the balance steadily increased on average. As mentioned in my Intro the potential liability is quite high and in the graph, you can see there were about 9 serious drops, but you can also see that the winning selections recover the losses fairly quickly.

When this review started, I didn’t think it would be successful, especially as we experienced some early set-backs. But over time the Formula has vindicated itself and now it is one of my major trading strategies that I use on a regular basis.

After the long break for the close-season this summer, I wasn’t as strict in selecting matches as I felt I had a feel now for what matches I should choose. So I tended to not have any no-bet days. Whenever I used the formula on the day’s matches I tended to be able to find one.

Also in my personal betting I extended the match selection to lesser leagues and although I haven’t included them in the review, they too have produced profit for me. The Formula looks for matches with high volume of traded funds, but I have found it works even when much less is being traded.

There are some odd aspects to Betfair Success Formula. In some ways it is counter-intuitive.  Also far more profit is made if the match initially goes the wrong way and then swings back. Also occasionally when it does go the expected way, it can be somewhat difficult to make a profit. But overall, usually a nice steady profit is made when it goes the way you expect.

During the review I also noted down the profit to be made by trading out earlier. The manual recommends waiting until half-time to trade out. That’s what the results of this review have been reporting. But often there are opportunities to trade out earlier than that. On these earlier trades I have made a total profit of 45.48 points compared to the half-time profit of 109.35 points. Much less profit, but much safer.

Overall this has been a surprising and enjoyable experience and am delighted to have a successful strategy to add to my personal portfolio of trading strategies.

Overall I am passing this with 3.5 stars, which is deliberately on the conservative side, due to the relatively small profits made on some matches compared to the funds tied up in the lays and due to the rare, relatively large losses. However over a long review period I have found the strategy to be surprisingly safe. Over 1% of the bank profit per match means that one could easily ratchet up the stakes – for the review I stuck to the level £10 lays for a £100 bank.

The Betfair Success Formula is a valuable addition to anybody’s betting portfolio and with patience and discipline you will soon be making regular and steady profits for life or as long as there is in-play trading on football!