The review forFlat Ratings Pro was due to end on the 103rd day, but in fact it ended on the 93rd day, then reduced to 74 days after the no-bet days were removed (see note below) because the Flat Ratings Pro service ceased at the end of the all-weather season on 30 April 2011.

The Flat Ratings Pro service started in mid-December last year and I was pleased with the steady progress made at that time. After three weeks it had made just less than 20 points profit and peaked on the 45th day with a profit of 49.58 points. It is true to say that the overall performance disappointed by the close, which coincided with the start of the turf season. The author of Flat Ratings Pro, Steve Ransford, has vowed to analyze this more closely and is considering whether or not to resume the service in June on the turf or wait until the all-weather season starts again in November. The loss of 24.41 points during April may help him to make this decision. The graph below illustrates the trends and is composed using only days when there were selections and does not take into account no-bet days. In other words it lasted for 74 days and not the 93 as reported during the review. There are four major losing trends shown here, but not as serious as the period from the 63rd to 72nd day. The drops in form were usually recovered, but not during this time. 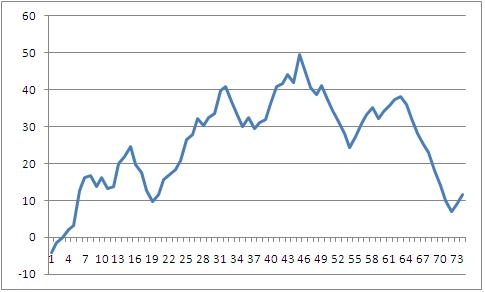 Tips were received by email overnight, usually from 3am onwards and it was always advised to place your back bets as early as possible. I am an early riser so the price I took was usually matched at no difference to those reported on the site’s results. There was only one UK race selected per day and the message consisted of a list of selections with the ‘Value Price’ alongside in brackets.

This price would be rounded down to the Betfair equivalent so a 6.28 Value Price would become 6.2 on Betfair, 11.8 became 11.5 and 3.75 became 3.7 etc. Attached to this email was an Excel file listing all the runners with the selections and their Value Prices alongside. The left-hand column (Input) was used to record non-runners (enter NR) and when pressing return the Value Prices were reduced. The example below shows the field for the last selections despatched, the one following shows a non-runner with the prices reduced, although there was not a non-runner in this race.

There were occasions when one or two selections were not matched so the success or otherwise depended on the remaining matched selections, but then again the liability was also reduced. I personally found that the early morning price was often easy to get and sometimes much greater than the Value Price, but, of course, that does not mean the nag will go on to win.

Flat Ratings Pro really is a ‘back and forget’ service, ideal for those with a ‘proper job’ who can place their investments early doors, go to work and check the result when they return.

If the Flat Ratings Pro service had been closed after the 63rd day then I am sure we would looking at a more favourable pass mark than we are able to rate overall. There were 270 bets (that is those selections that were matched), 43 winning bets, 227 losing bets and the overall strike rate was 15.92%.

As the objective was to find the race winner using multiple selections, it seems only fair to also quote the SR based on winning races.  From a total of 74 races, the winner was found in 43 of them, so a SR of 58.1%

I felt quite happy with Flat Ratings Pro until the dreaded Day 64 when there were nine defeats in succession. It is without doubt that during April (and October) when the disciplines of horse racing merge, then change, various anomalies creep into the selection process (then the results). Check any tipster’s results for those periods and there are generally changes in form and results. In this case it is probably better to leave the turf season alone and concentrate on all-weather racing. No one could blame the author for being cautious, particularly when he is trying to deliver a good service and put money in his members’ pockets.

I would give Flat Ratings Pro a middle of the road pass mark of 2.5 stars out of 5, based purely on all weather results, his exemplary attention to detail, superb customer service and producing a ‘hands off’ backing service that anyone could use.