Sergeant John here with the final review of the Lay Bet Profits service, which is one of the Bet Kudos group of betting services and is run by a guy called Nick.

I decided to go beyond the normal full span of the review (84 betting days) in order to take into account selections which were lost to the members of the service due to an attack on the GetResponse email system earlier in May.

In effect this caused a delay publishing the tips, resulting in them not reaching their intended targets until hours after the race had been run. As it was not by any means the fault of the owners, I thought it only right and proper to include the ‘missing’ tips in my calculations.

Generally the selections were delivered in good time in a clear and concise fashion, with a brief explanation why the selection had been made. However, in all cases this explanation was based on how the trainer of the horse in question had performed, rather than how the horse might perform, something I found slightly odd. Something else I found odd was Bet Kudos’s patent inability to understand how to work out the 5% reduction of a winning bet, due in commission to Betfair. They insisted that they were taking it off and “used ArbCruncher” in order to calculate it. I showed them a simple calculation to work out the reduction and gave them a screenshot when I had used ArbCruncher to show them what they were doing wrong, but it had no effect. A visit to the site will show that all profitable lays show the profit figure exactly as if a commission is not involved at all. Overall their results have been inflated by at least 20 points.

Since my communication with Bet Kudos regarding commission they have included a line at the foot of each set of results thus:

*Please note profit does not take into account any commissions that may be payable to Bookmakers or any monthly fees required to join relevant services.

No staking plan was suggested for this service.

From the line chart below it is evident that for a little over half of the review the service was in a losing position, only emerging back into the black on Day 53.

A loss, which meant a reduction in funds of 20 points, the maximum liability, was always a blow and, having watched the curve rise steadily following Day 53, losses on days 58, 60 and 67 slowed down the progress before three losses in succession saw the graph plummet. There were a further three losses before the end of the review, but with six winning lays pushing the final profit up to 36.26 points. 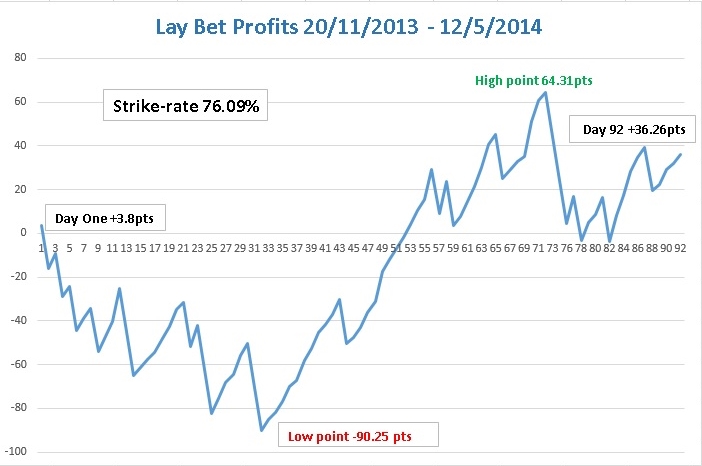