Sergeant John here with the low-down on the finalisation of the review of the Football Lays service, which comes from the Steve Davidson stable, together with his associate, Dennis Young.

At the interim stage of the review (56 betting days), although the balance was in arrears, it was decided to go the full span of the review (84 betting days), in the understanding that such systems do fluctuate in success and could well take an upturn. Unfortunately this was not to be and by Day 83 losses had slipped to 142.3 points.

The service from the lads Down Under was superb. I opted to take the easy option and have the selections delivered directly into my inbox, which came in a legible manner with each league identified separately with the performing teams and their points value underneath. They also came promptly, usually about two or three days in advance of the match, normally covering Friday to Monday’s matches, there not being many matches in midweek. Queries were dealt with promptly.

At the outset of the review I have to admit to getting my knickers in a twist and forgetting that the selection had to be the favourite in the game to qualify as a bet. This did not cause too many problems, for when my head was screwed back on correctly by Day 5, there was only 1.35 points difference from the start and the balance had never been out of profit. By Day 38 I had been getting random comments that I was missing selections (which was totally unfounded) which prompted me to make these comments on that day: “I have received a few comments regarding my ‘missing’ selections, particularly winning ones, so to clear up my end I have decided to adjust the results grid to include all the recommended selections and identify those which did not make the cut and the reasons why. I am quite confident that I make every effort to get the best price while eliminating those which are either too high a lay or are not the favourite in the match. I check prices from when I receive the selections, sometimes two days before the match and continue to check until as close as I can before the game. I do not use a bot to place bets because that would not be fair to those readers who do not have use of one. I have to perform as a basic punter would after subscribing to the service and my figures reflect this.”

Using the message ‘too high’ or ‘not favourite’ also highlighted the amount of selections, but more significantly how many did not qualify. On Day 80, for instance, there where 40 selections with only seven qualifying. Most busy Saturdays and Sundays were the same, about 80% of selections disgarded. Considering that the punter had to wade through every single selection, sometimes four days’ worth each weekend, recording the current price of each maybe three or four times, you had to be a dedicated football layer to stay focused.

I found the best way of recording bets and checking prices was to copy the incoming selections to an Excel file and tap in the prices from the Betfair ‘multiples’ tab, which gave the fixtures and prices from all the leagues. I would record all four days of the weekend selections then check again on the day of the match. More often than not the prices would be lower when I would also eliminate those ‘too high’ or not favourite’ in the match.

The Football Lays started off quite well and by Day 12 it was showing a 23.85-points profit, eight betting days later it had slumped to a 1.03-points profit. It then had a succession of profitable days, the peak day being Day 23 when it made 20.63 points and, seven days later it peaked at 58.11-points profit – with only two losing days in the previous eight days. Sadly, instead of progressing at much the same pace, this peak was never to be surpassed and as the table below shows, there were only two rises in profits for the rest of the review, only a progressive downward curve.

We came into this review with news that profits from the European season last year had made 713 points profit. Patience in laying is an essential quality, but I believe the gentle punter may have been losing theirs two-thirds through this period and were probably tearing their hair out by the end.

In all there were 469 bets, 188 of which were successful, a strike-rate of 40.08%. This sounds pretty good, but consider there were 47 losing days and the strike-rate does not take into account the depth of these losses. There were a couple of winning days in the region of plus 20 points, but there were eight days with losses of 13 points or more, including one of 31.51 points.

Obviously over the  review period this service has not done well, but I have a sneaking feeling that, had the authors cut out the English leagues the results might have been better productive. There done tend to be less surprising results this side of the Channel than on the continent, who have low lay prices and high returns when they draw or lose. Food for thought?

The current cost of Football Lays is £69.97 and, consistent with all of Steve Davidson’s digital products, there are no refunds. 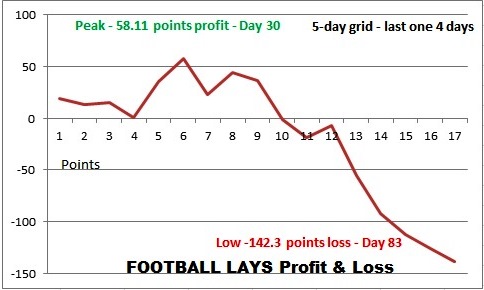