Well dear readers it looks like yet another tipster service that performed so well for so long for it’s members has decided to go south. This tends to happen quite frequently with betting systems that are not ZERO risk. This in my opinion is because systems do not work long term…

I wanted to give MERLAYS as much time as possible to recover from it’s current plight but alas it continues to under perform and so I can no longer stand by and allow it to continue with it’s 5 star rating on Betting System Truths.

I have continued to monitor and receive Martins selections since the end of my last update (19th April 2016) and to say this has been one of the biggest turn arounds I have seen with tipsters is an understatement. It has been a complete shambles since the middle of May 2016 in all honesty. From the 16th April to the 16th May Martin made another +69.44 points profit. This figure is important because at this point Martin only had around 25 members receiving his tips. From the 17th May we understand his membership grew by around 75 members according to his marketing.

MERLAYS posted a profitable month in May 2016 of +27.28 points profit. However Martin was showing a profit of +39.45 Points profit at it’s highest point on the 16th May 2016. From here on things started to go pear shaped unfortunately for Martin.

Since 16th May we have recorded a 60 point downturn with no signs of recovery hence why we have decided to re-score this service.

Here are the figures since our review ended. (You will see they are still in profit but the downturn has to be taken into account)

So you can see the strike rate has come down and the average losing odds have gone up which has resulted in it not being so profitable as before. We feel that 306 selections is enough to determine that this has taken a downturn that it probably wont recover from soon.

The graph below shows you the results to level stakes since we started getting selections on 24th January 2016.

You’ll notice that since 16th May 2016 and over 300 bets later there is a continued trend of losses. 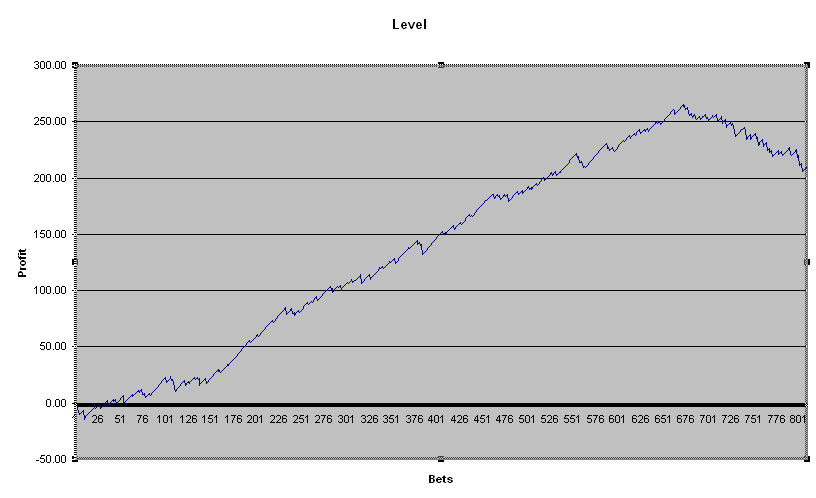 I noticed that the average winning odds of losers was getting higher than usual… His strike rate dipped and there was less frequent selections being sent out. Although somedays more than made up for the lean days. You only need a small loss in strike rate coupled with a change of an average losing lay from 4-6.00 BSP for results to swing in to losses. That’s laying for you…

Betting System Truths has been reviewing products for over 9 years now and so we see the patterns and recognise when a tipster is due for prolonged losses..

The only products that we have reviewed in the past which have kept their 5 star status are those which have stood the test of time and those which we are able to follow on autopilot to determine their results longterm.

I think you will find no other site re-reviews and re-scores products which get 5 stars… And it is our commitment to re-adjust figures of a service as soon as we see a pattern forming. We have the experience to do this and we are usually right…

And so I have decided with the permission of Kevin (Site Admin) that MERLAYS will be FAILED.

I have spoken to Martin about our decision and although unhappy (because his long term results are still showing +210 Points profit as of 10th July 2016) he accepts our decision.