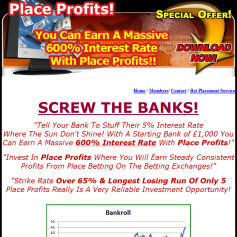 Apologies for the late summary of the place profits review.

Place Profits is a horse racing tipster service backing horses in the Place Market on Betfair. The service costs £37.97 per month and includes selections to be backed at SPs of shorter than 6/1 (Place Profits 1) and shorter than 7/2 (Place Profits 2).
Potential selections are received by e-mail every day and are also available on a members web page. The one aspect of Place Profits that can be very frustrating is the SP rule. There were many occasions during the trial when advised selections went off at a longer price than the 6/1 and 7/2 rules which then went on to win or be placed.
The author maintains this rule is there to prevent long losing runs but in my opinion, backing horses should be more about identifying value in the market based on the probability of the horse being placed rather than placing so much emphasis on the SP.
Indeed, many of the SP non qualifiers were placed at SPs of 7/1 upwards and included a 28/1 outright winner. I did ask the author for past records of his selections and SPs as I wanted to see whether backing the horse to place at any SP would have resulted in a better or worse points profit for the trial period. Despite several requests, this information was not made available and the latest reason given this week was that he had lost his records during an office move!
The Place Profits sales page claims a strike rate of over 65% but during the trial the strike rate was 59% with 153 winning bets from 258 qualifiers.
Having said all this, the service did make a profit during the three month trial period. Place Profits 1 made + 8.47 points and Place Profits 2 made + 3.48 points, a combined profit of 11.95 points net of 5% Betfair commission, using Betfair SPs.
Even so, an average 4 points profit per month during the trial period is not much to shout about and would require stakes of £10 per bet just to break even. Many qualifiers were favourites or second favourites with very short prices around 1.50 or shorter which held profits back.
Strike Rate: 59.3%   (153/258)
Cumulative P/L:  +   8.47 points  (Place Profits 1)

In summary, I recommend Place Profits is placed in the PASSED category as it did make a net profit during the trial but only with the minimum 2.5 stars as the net gain was not that impressive.

[Click Here to see the sales page for Place Profits...]