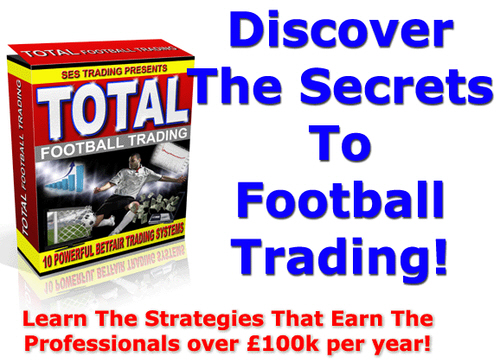 Total Football Trading The Paper Chaser is one of the trading strategies included in the Total Football Trading package. This is a pre kick off football match trading strategy, which requires a professional, disciplined approach, utilising a stop loss strategy. It only works in respect of evening games, so is only applicable for mid-week football.

So how did it do – and how did I find the system to use?

These were very good! After a dodgy start, when I was getting used to the trading approach, the trading methodology gave me consistent gains.

After 3 days I’d made 3 trades (with an initial 100 point liability on each), and lost 9 points (from my starting bank of 1000). That was the low point as I tasted some relatively early success, and ended 123.45 points up at the end of the trial (after charging 5% Betfair commission) from 85 trades.

I found that I was similarly successful with both back & lay initial trades, and uncannily placed almost identical numbers of each type (43 back bets, 42 lay bets, gaining 57 & 63 points respectively). The most successful trades were where I initially backed teams at between evens & 5/4, or where I initially layed teams at between 1.3 & 1.5. However, the sample sizes were small, and these results are therefore not statistically that meaningful.

This is the downside of the approach, in that to use this system effectively, you need to have regular access to Betfair from early in the morning until kick off time in the evening. If you can’t access Betfair regularly in the morning, this isn’t a system for you! You need to be disciplined in ensuring that you don’t trade when you can’t be sure you can monitor the odds movements (unless you have access to a bot to apply a stop loss if the odds move against you). Unless you are working from home, that makes it difficult for most people, although you can access Betfair via a smartphone.

You also have plenty of days when there aren’t many matches to select from, and you have to make sure you don’t “force” selections because you haven’t had a bet for a couple of days.

As highlighted above, the approach includes applying a stop loss to the trades. The manual provides a recommended stop loss of 6 “ticks” per trade, but I found that that was too simplistic and would have resulted in significantly different risks being taken depending upon the odds. I devised my own table to identify the stop loss – which still ended up exposing me to varying risks (laying short priced favourites could be costly) but was an improvement on the single target.

I enjoyed using this system, albeit I was trading to very small stakes and therefore taking minimal risks (just to test out the approach).

The rigorous use of a stop loss reduces the risk considerably. I ended up reporting the Return on Investment not in respect of the initial liability (which started out at 100 points) but as a percent of the risk being taken on the trade if the stop loss was applied.
Here is one of the examples:
10th January. Real Madrid @ Malaga (Spanish Cup). Initially laid Real at odds of 1.46. For a liability of 100 points, the potential gain was 217.4 points (pre commission). The stop loss applied was to close out if the odds fell to 1.42. This would require 223.52 to be invested to close out at a loss of 6.12 points irrespective of the result. The “investment” wasn’t really 100  points, but was only 6.12 points. This trade made 1.4 points (closing out at odds of 1.47) – therefore returned 22.9% on the risk investment.
Overall, the trades made an ROI on this methodology of 38.9%. However, taking into account the amount of abortive time, it must be made clear that in order to make a decent profit, the initial betting bank (and stake) has to be pretty large. Using £100 liabilities per trade would have made £124 over 85 trades and 36 days of trading. That is only £3.40 per day! However, the overall risk taken on all the trades was only £316. In order to ratchet up the profits to a sensible level, each trade would have to be at least £300, which would at times have required a bank of £1500 (although the true risk would have been only around £60). This is not a method to employ if you have a limited betting bank.
4. Support
There wasn’t a great deal of support required, although when I intially made a loss on a trade which many of their members made a profit on the vendors contacted me to ensure that I understood the system, and made some additional suggestions (such as limiting the maximum odds levels).

Total Football Trading weighs in at four hefty pdf files (a total of 11.5MB). It currently costs $77 and for this you get ten different football trading strategies.

Each strategy is described in detail as to trading entry points, exit points and likely success rate. Match selection is perhaps a little less detailed, but I believe a careful read of each strategy should lead you to the right decisions. Each strategy then has several real examples with screen shots of the trades, these help you to understand the strategy.

I didn’t mention it in the Introduction, but for the strategies, common reasons are given for why some people fail with each strategy – a useful feature, telling you how to avoid those mistakes.

It’s probably best to just take one, two or three of the strategies and concentrate on them, rather than trying to do more. So there is probably a total of several months of comprehension and testing of the material that you buy. This package is particularly useful for those new to trading and football betting. It is also useful for more experienced traders who might need a refresher course on the basics.

There are pre-kick-off strategies and in-play strategies. Obviously, during the trading period, whether it be before kick-off or in-play, you do need to be able to watch the Betfair (or BetDAQ) markets. So you will need to be professional about what you do and not allow yourself to be sidetracked.

It is not possible to say that any other user would have the same success that our reviewers have had, as individuals will make different decisions at different times.

Of the five strategies that we tested four of them made a profit and one made a small loss. For these reviews we tried to run each one with a comparable staking level and betting bank. In total the five tests made 436.15points profit which averages at 87.23 points profit per strategy to a starting bank of 1,000 points each. That starting bank proved to be more than enough to cover bets. Because you initially might be laying, you do need a sufficient bank to support the lay bet, but due to safety exit strategies, with discipline, this bank is never put under threat.

Overall the five tested strategies averaged over 8% profit in 12 weeks – better than any high street bank can give you. Please, however read the individual reviews, to realise that sometimes quite a lot of time is taken up monitoring matches. All the more reason to have a selection of the strategies in your armoury, so that you can apply one or more technique for the same amount of time in monitoring matches.

Profit is profit and regular readers will know that many, many of our reviews don’t make a profit! I would be amazed if any reader could not turn a profit using a selection of these strategies. So long as they are applied with discipline.

Bearing in mind that all three of the reviewers made a profit (with individual pass ratings of 3.5, 3.5 and 3 stars) and that there are five more strategies in the package, I think an overall pass of 3.5 stars is fair. Please note that one reviewer (Sgt Magnifique) thought an overall pass of 3 stars was the correct rating.

So overall I am giving Total Football Trading a 3.5 star pass.

[Click here to read my review of The Underdog]