Seems a while back since we started the review but to just refresh the memory Backing Star Selection Service is an e-mail selection service where by you receive a certain number of horses and then just before the off you check that the selections race to make sure it has no more than 9 runners and that the bet itself is no higher  than 4.00 on the Betfair place market these  Rules apply to Plans A,B,C and D if the two rules mentioned previous are passed then you have a bet, there is one further Plan and that is E  now a part from the 9 runner rule the odds to be a qualifier must be between 2.00 to 4.00 inclusive on the Betfair place market. Now Plans A and C are to level stakes and then the others are percentage of the bank and in the case of Plan E it is a 1, 2 and 4 point staking staking plan. I have produced the staking part below from my initial introduction:

PLAN A – ONLY FOR PLACE MARKET – LEVEL STAKES

PLAN B – ONLY FOR PLACE MARKET

– Always stake 2% of your bank on each bet. Adjust your new stake accordingly after each bet.

Adjust your new stake accordingly after each bet.

Stake 1% of your bank in place market as long as place odd is 2.0 or above and below 4.0. If selection

And now come back to 1% independent of whether the next selection now wins or not. Remember that

at any stage if selection get unplaced and you lose your bet then stake 1% on the next selection.

Now having got that that out of the way  the only Plan that produced a profit at the 56 day stage of this review was Plan C which is Level Stakes on the win market now i willl be dividing this service into 4 seperate final reviews A& B i will do together as they use the same approach, Plan C this one and then followed by Plans D and E seperately.

Well thats enough background what happened during the review well here are some stats to digest for the whole of the review then we will have a look at the weekly profit and loss graph:

Now lets have a look at how Backing Star Selection Service performed  weekly over the review period: 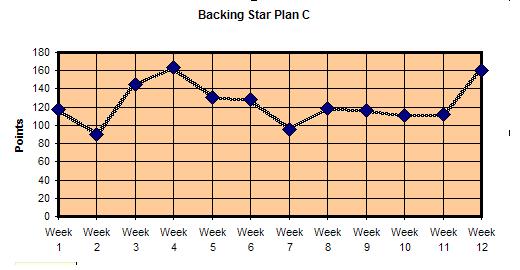 Well the first 4 weeks went reasonably well and the service hit a respectable 163.83 on the fourth week it’s highest peak during the whole review  it was actually during the end of this week April 11th to be be precise that things went into decline and continued a downward trend until May 5th where the service rallied slightly. For the rest of May it remained stagnant it actually went as low as 71.29 points on May 31st so had lost 28.71% of the starting  bank, come the 1st of June things all suddenly changed and by  the 2nd week in June Week 12 the service was buzzing. So what happened after the review had finished did the service continue to perform yes it did from June 11th to June 31st it made another 78.34 points so for the whole of the month of June it made 167 points profit which  the service has never achieved in any other month as we shall see, to counterbalance this July has started of very badly from the 1st to the 10th it has lost 48.44 points. To get a better overall picture lets look at the results in a graph from the time the service was started which was July 23rd 2010 upto July 10th 2011 so very nearly one year: 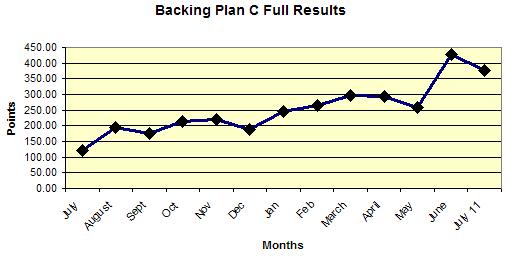 So the graph shows us that Backing Star Selection Service has made a steady rise in profits and of course a steeper rise when we hit June and with a sudden drop due to July’s poor results so just to complete the round up here is the stats breakdown for the full period:

This one has certainly been a testing Final Review to do and certainly time consuming i will try and do the other Plans as soon as i can. Now one reason that Plan C was able to recover quicker than the other Plans was that it is straight forward win betting, some of the place odds on the other Plans were very low although they will recover but albeit very slowly, anyway we will cover this in the other Final Reviews.  One of the reasons the Final Review took longer was  due to what happened during the review ie the big slump after 4 weeks and then a stagnation period these took up over half the review and the the last week finishing strongly i decided to monitor it for a few more weeks and check what happend before i started the review. The conclusion i came to was that it was a freak period the service has had a few losing months before but not consecutive, the winning run did continue throughout the rest of June but the returns were way above the profits made in any previous months so this again could also be classed as a freak period. If we take the actual review period despite the ups and downs Plan C would have still passed a ROI of 5.90% was good enough for this, but i think a clearer picture of what the service is capable of, can be seen in the full results data and graph  a steady rise in profits most of the time with just an occassional dip and a profit of 276.75 points which equates to 23.72 points a month this using 2 points level stakes and heading close to a 10% ROI.

The e-mails for the most part turned up well before racing and quite often before 9am, and only once did i did not receive an e-mail but you always have the back up of the members page which gives you the selections too. What is the cost of the service? at the moment you have 4 options, monthly at £29.97, 3 months at £75.97, 6 months at £119.97 and best value 12 months at £199.97 which is equivalent to 16.66 per month so overall the subscription fees are quite reasonable.

So downsides well in order to know if you have a qualifying selection you are advised to check the Betfair Place market just before the off to make sure its place odds are not greater than 4.00 and also that the race has no more than 9 runners this means that you would need computer access when racing is on although you would not need to spend all afternoon or evening because you already have the times of the possible selections. As far as i know there is no bot on the market that can check the Betfair place odds and then place a bet on the Betfair win market if a horse qualifies because the two markets are independent. From my own point of view i would like to have seen a few more substantial winning runs besides the winning sequences already mentioned there was quite a few hatrick of wins but i just feel there is a slight inbalance between the the losing and winning runs. You really cannot afford to miss a day when you have received your e-mail  selections it has produced some good priced winners and sometimes they come out of the blue this happened a couple of times during the review. Certainly you will need to be disciplined and stay focused to survive the losing runs and not to miss a bet as i mentioned in the previous sentence it does have some good priced winners.

So taking all the factors into consideration and the reasonable price of Backing Star Selection Service i have decided to award it 3 stars.