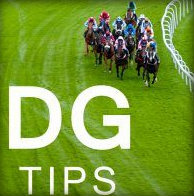 Day 2 we have a few more bets than yesterday. 7 in all.

If you have any questions, leave a comment below. I hope you enjoy the review.
[Click here to see D G Tips]
Regards,