I won’t repeat too much from the Intro – you can read it here:

And a full software review is here:

Briefly, this is a software database that uses past results to find bets for upcoming fixtures. I have run a test system for each of the three available versions of the software. Remember these are just example systems using the Form Labs software. You could develop whatever system you wanted.

The software is available in three versions:

For Form Labs Pro I tested one particular in-play query. There are an almost infinite number of possible queries you could ask the software database. The Pro version allows for in-play queries – no limit to your queries. In order to test a system that you, the reader, can replicate, I tested a half-time query, where I entered the half-time match situation and chose as my bet, a “value” bet that is indicated, given the half-time situation. So I called this strategy “Half-time in-play query”.

For Form Labs Black I tested the “live logic” feature. Again there are many, many ways you could use the software. To make it possible for our readers to copy I consulted the Live Logic at the 60th minute of the match and placed a bet based upon the statistical prediction given at that time.

By the way, I also said in the Intro that I would report the results from the Daily Reports, available in the “Lite” version. Unfortunately the April results are not yet posted up on the software. So I’ll report the last three posted months.

These results are below the average since July 2010 which has a total ROI of 9.55. But nevertheless it shows a profit, and profit is profit!

So how did I do with my three systems?

Here are the bald final figures. I have to say that instinctively I thought it was a mistake to continue the testing after about week 8. The last few weeks of the major leagues are very unpredictable – too many teams have nothing to lose or nothing to play for and form becomes much more unpredictable (as it does at the start of the season). This was born out with the results. Obviously past form becomes less important as the season ends. So I wasn’t surprised when the results dipped after week 8.

All results are to £10 level stakes. 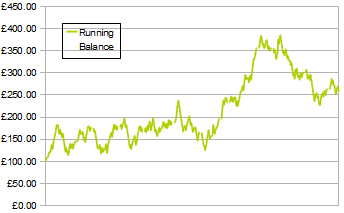 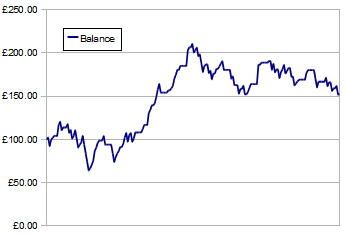 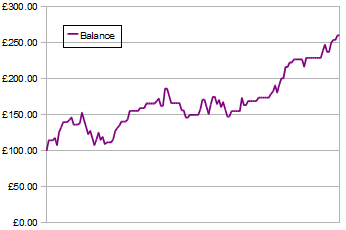 Interestingly the results for Form Labs Black held up in the final weeks – which makes sense, as it is based upon what is actually happening in the match at the 60 minute mark. So the end-of-season blues don’t seem have had such an effect.

It is obvious that I would need more skill for the half-time queries to be more profitable. This emphasises the fact that how you read the software is vital.

The Game Notes interpretation is easier. Before the end-of-season period of unpredictability it was regularly profitable. The 2.5 goals selections were doing OK until the last 2 or 3 weeks, probably for the reason above.

Much more interesting is the application of a simple filter to the Game Notes selections. And that is to simply only take the selected bet if the odds are less than 2.0. Throughout the review usng this filter has been more profitable than taking all the selections and much better than taking only the 2.5 goal selections. The profitability of this filter has even held up during the end of season weeks. It went slightly down after the high of week 8, but not drastically so. 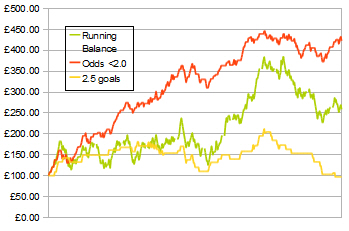 So the recommendation is to take the obvious bet from the game notes and only back it if the odds are under 2.0.

The “Game Notes” are available whichever version you subscribe to. I would recommend using them after the first three or four games of the new season, when form is established and stop using them in the final three or four weeks of the season. Furthermore, to only bet on the suggested bet if the odds are below 2.0 (and I never went lower than 1.33). Further experimentation would be needed to use the in-play queries of the Pro version (but you could paper trade your experiments while you profited on the Game Notes). The “Live Logic” predictions at the 60-minute mark seem to be conclusively profitable. There are also many more features included in the “Black” version of the software.

With such a vast amount of data available, it is hardly surprising that some of my experimental systems were less profitable. But my aim in this review was to see if one could make a profit using the software. I think this has been conclusively proved.

P.S. I think this is the last review that I will be doing – I hope my reviews and the newsletters have helped some of you make a profit from your betting. Cheers!