I started writing this final review of Gavin Priestley’s Trainer Track Stats underneath a chart showing its successes since 2006-2007. An average profit of over 62 points per year in that time is very impressive, even more so when you multiply that by £20, the figure the statistics are based on, which makes an average £1240 a year. Let us not forget that those results were for an entire year, not for a six-month period that I have just reviewed. During the last six months I will show that at one stage the service was losing 175.56 points, that is a loss of £3511.20 based on the services statistics.

So should we be aiming for around a 30-point profit during this review? Maybe so, but the final figures showed a profit in the flat racing of 0.14 of a point and a loss of 7.56 points in the National Hunt results.

I am not privy to a breakdown of results over the two periods of the years previous, but if I was paying out for this service there would have been a gnashing of teeth after the first two months this year when there were only four wins from 26 selections, resulting in a 46.49 points loss.

Assuming the toothless punter had stuck to the task, he would have been well rewarded when the National Hunt tips started appearing two days later and kicked off with a win on the second tip. In fact, after five NH tips it peaked with a profit of 47.83 points on Day 74, but with the Flat racing suffering a 59.28-points loss.

Overall the punter was probably happy with the final analysis for the Trainer Track Stats, but at no stage was his bank better off than on the 80th day, when the two disciplines made a combined profit of 1.31 points. For the following 30 days the small profit became a distance memory as results plummeted to the massive loss described in the opening paragraph of this review. I must say that following this fall results picked up appreciably with 16 winning days to just fall short of breaking even at the close, but I cannot help feeling that the disgruntled investor would have thrown themselves upon their sword long before this.

I had no problems with the way the service ran during these six months. I picked up the selections by logging into the website and only a couple of times the information had not been updated, but an email was soon answered.

It sometimes did get frustrating when there were no tips. From the 163 betting days 72 had no selections, but when they were forthcoming they averaged over two a day.

The £39 price tag for the Trainer Track Stats service is a reasonable one and the admin of the organisation first class, but let us put these results behind us Mr Priestley, the last six months have been an unmitigated disaster. 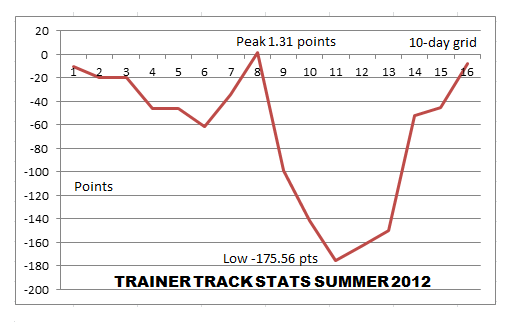 We have been contacted by the vendor, Gavin Priestley, as he was not happy with our Final Review. Gavin did make a valid point that we didn’t make it clear that the review was based on staking 5 points per selection, even though that is the staking that has been in use for all 164 days of the review, for which we held our hands up straight away and offered to add that to the review. Gavin also questioned the scale of the maximum loss so we asked that he confirm that to us so that again we could correct that if it was wrong. As we’ve heard nothing back from Gavin on that we will assume that the figures are correct. So to confirm that where John quotes profit/loss figures he is using £100 stakes because he started with a £5000 bank.
Where non standard stakes are used we normally quote the final profit/loss to 1 point level stakes, which we didn’t do for this final review. So the final figures based on 1 point level stakes was that the Flat racing made a profit of 0.03 points and the National Hunt made a loss of 1.51 points and so an overall loss of 1.48 points. To help clarify some of the other figures quoted in this Final Review using 1 point level stakes the loss during the first 2 months was only 9.30 points and the loss for the 30 days following the high point at day 80 was 35.11 points so anybody using the advised £20 stake on a £1000 start bank would only have lost £702.20.
None of this changes the rating of this Final Review and it is still Failed but we hope that has cleared things up for anyone. Having said that it doesn’t change our view that Trainer Track Stats is a worthwhile addition to anybodys betting portfolio as it has made steady profits for the last 6 years and while the summer version hasn’t performed well this year there is no reason to suspect that it or the winter version won’t perform well in the future.