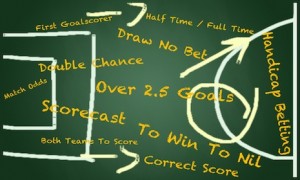 It has been documented in the comment section that since our review this service has gone on to lose 275 points since January 14th 2014. I must stress again that although our reviews carry a star rating this is only depictive of the results during our review and the star rating below is a measure given for that period only which not only represents points profit attained during the review but also 5 other factors.. Final Score remains a 4.5 Star product until the time comes where we can independently review it again. We only print reviews and stats that our in house review team publish. All BST readers however can become reviewers at anytime and help the cause. Jon has answered about his service and fully expects it to turn around long term. We also support that statement based on what we have seen in the past and during our review. 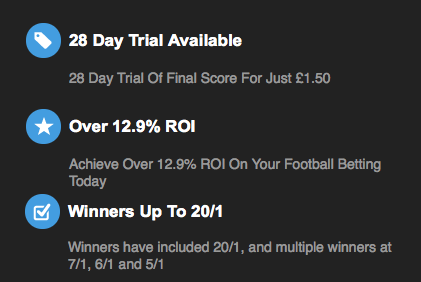 Final Score is a football betting service. They did not provide bets every day, but there was a good selection over most weeks. The same format was used each time, with bets being split into 5 main categories and a points value for each bet suggested.

I should mention first of all that we had a couple of mishaps during the review and missed a few days here and there, so my results do not exactly correspond with those of the vendor, but they are substantially the same.

The review started on the 2 Aug 13 and finished on 8 Jan 14 when we reached 84 betting days. As there were not bets every day, the actual period covered from a subscription point of view was just under 23 weeks at £10 per week. This advice therefore cost us about £230.00 and I finished the trial 182.76 points up.

At Jon’s rate of £100 this is £18,276.00 and even at a very reasonable £5 is £913.80. During the trial we bet a total of 1,052.50 points, an average of about 12.50 per betting day, but it did tend to be much busier at weekends. It should also be pointed out that we started at the beginning of the main football season and have not gone through a summer period, so games to bet on have been plentiful.

These figures though are a bit misleading, because the bets include Accumulators, Lucky 15’s, some 10 pointers at 1.40 and some 0.5 pointers at 20 or more. Probably the fairest assessment of Final Score’s success is the return on investment. As already stated we made 182.76 points from 1,052.50 points invested, which gives us an ROI of 17.36%, which is excellent.

After a blistering start we settled down to a more steady pace. There were losing days and losing weeks but the the profit graph shows a strong upward trend over the period. Emails turned up in good time for the matches, normally with at least a day’s notice. Bets were generally easy to place at the odds quoted or better. A bank of 200 points was suggested which I think is adequate to cover the inevitable downturns along the way.

I was sure in the early days that we would at least double our starting bank during the trial, but it did not quite happen, we had to settle for a 91% increase. Past results detailed on the site are also very good, so I see no reason to suppose that profitability will not continue into the future. Almost doubling any bank during the review is very very healthy [Rating:5.0]

Emails always arrived in good time. Selections for the weekend normally arrived on Friday morning and if there were midweek games it would be on the morning of the games at the latest. Best prices were listed with the relevant bookie named, although there were often better odds available nearer to the match time. Instructions are very casual, with just “Chelsea 1” or similar on the list, no mention of the day, date, time, competition or opponent. Once I looked at the fixture list though it was not a problem, and I don’t think I missed any bets because of it. [Rating:4.0]

Losing days were regular but not frequent. Most days we had a good mixture of bankers and longer odds bets. Losing runs never lasted very long, and because of our excellent start we were never anywhere near the starting bank level, much less below it. [Rating:4.0]

As it was an easy and straightforward service there was really no documentation required and I never found it necessary to ask for any support. Selections arrived on the same template each time, with often comments on the previous results. Personally I quite like it when the author highlights his good results and acknowledges his bad ones. Full past results were always available too, which I like to see. [Rating:5.0]

Because the emails arrived well in advance and the bets were generally easy and straightforward I would say this could be operated by even the most novice gambler. It is always better to have access to the best odds available, but for those who do not want loads of accounts you could manage with just one, although if it were a Betfair account you might have trouble with the occasional accumulator. [Rating:4.5]