Our Overall Is Rating:

Place Profit Blueprint is a straight forward backing service and as it only uses the all weather courses there tended to be bets most days. There were a few days where there were no selections and that was mainly on a Sunday.

They quote the average number of bets at between 3 and 4 per day but some days there were upto 10 selections but these tended to be on days where there were additional meetings put on to replace abandoned jumps meetings.

Since the final review ended I carried on receiving the selections and the results are below. 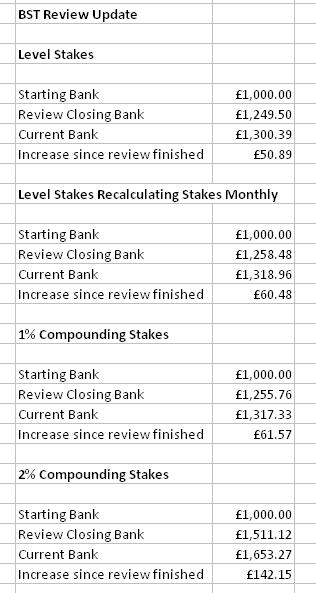 Place Profit Blueprint is sold as a slow burning service. The starting bank increased by just shy of 25% (24.95%) using level stakes during the review and the advised 2% staking plan saw the starting bank increase by just over 51% (51.11%). Past results detailed on the site are also very good, so I see no reason why profitability will not continue into the future. Rating:

The selections are available via a members area and were always available when I checked which was generally around midday. Selections are clearly listed. Rating:

During the review there were were 252 qualifying selections of which 119 won (won or placed) for a strike rate of 47.22%. Losing runs are to be expected with the odds range used and losing runs during the review were in line with those quoted.
Rating:

The ROI for level stakes was 9.90% although it was running at over 20% for the first half of the review and the short drop in ROI is probably linked to the atrocious weather we’ve had this year. Rating:

As it was a straightforward service there was really no documentation required however they do supply a page in the members area advising the staking. I only had to contact support twice and both queries were answered promptly.
Rating:

Bets could be placed as soon as the selections were available although they advise waiting until closer to the start of the race to make sure that selections are within the advised odds range and also to replace any non runners with the reserves selection. The only downside at the moment is that you can’t really use a bot to place the bets as you would miss out on non runners but I’ve been advised that a bot will be made available later this year and members will be getting a massive discount when it is available. Rating:

Our Overall Is Rating: